If you are wondering what one million words look like, consider this: the seven books in the Harry Potter series amount to 1,084,170 words. Now the second book in the series, Harry Potter and the Chamber of Secrets, is about 85,000 words. So, if we take the Harry Potter Box Set and pull out the second book, whatever is left is a very good picture of how many words I have written.

And this journey of a million words started with counting the fourteen in the line below.

“No matter how I start my career, I will retire only as a writer.”

It was my 19th birthday. And as a birthday resolution, I had written to myself a rather long manifesto outlining why it was absolutely necessary for me to sit down and write books some day. That manifesto had 4,382 words. It was the longest single piece I had ever written and by the time I was finished with it, I had brainwashed myself into believing that every self-respecting writer should keep a proper word count. So, I opened up a Microsoft Excel Spreadsheet and punched this number in. Some days, I still wonder if I should tattoo 4382 somewhere on my body.

So, how did I count my words?

Did I count everything I ever typed? No. This is a “proper” word count, after all.  It has strict rules for what gets included and what gets thrown out. And like every self-respecting set of rules, it has its own vaguely defined exceptions as well. These rules and exceptions have, of course, evolved over time, with several rules coming in and going out. Today, however, the list has two simple rules only.

Rule 1: If it’s published, it counts. But all the fluff around it doesn’t.

Whether it’s a novella on Kindle or just a poem or even an article commissioned by an organization, if it’s out there publicly accessible, it counts. But all the supporting documentation, like notes and character sketches and plot outlines, doesn’t. Also not counted are the words I write to share and promote these published pieces through social media, email, and private messages.

This doesn’t mean, however, that everything I write on social media is thrown out. The little independent stories I write on Facebook get counted. So do the answers I have written on Quora and the book reviews I have written on Goodreads, Kitaab and Amazon. These too have their own fluff and those don’t count.

Exception: If I someday publish the fluff as part of an independent article or book  – probably one explaining my process of writing – then they will start counting from that day on.

Rule 2: If it’s a draft (not yet published), it still counts. But all words crossed out in it don’t.

Before getting published, all my drafts are riddled with strike-throughs. This is because, , I realised it is a much better practice to simply cross off the words I don’t want  rather than erasing them with the delete button. This is because I never really know when I would want to reuse those words. As such, when I update the word count, I subtract the number of crossed out words from the number that MS Word or Google Docs give me for that draft.

Everything I write in my Learnings Journal also counts in as per this rule. This journal is like a Dear Diary, except that I have edited and polished these pieces for public reading. I hope to publish them individually when the time is right.

Exception: When it comes to longer works like novels and novellas, it becomes really tricky. There have been countless times when I had to rewrite multiple blocks of paragraphs or even entire chapters because of some major structural change. These changes are of a different nature than the line edits I make with strike-throughs. These changes don’t mean that the large chunks I rewrote or left out were not “proper” writing. They had taken just as much effort and I had learned just as much by writing them. So, those chunks are still counted.

Following these rules, here’s a breakdown of the first million words. 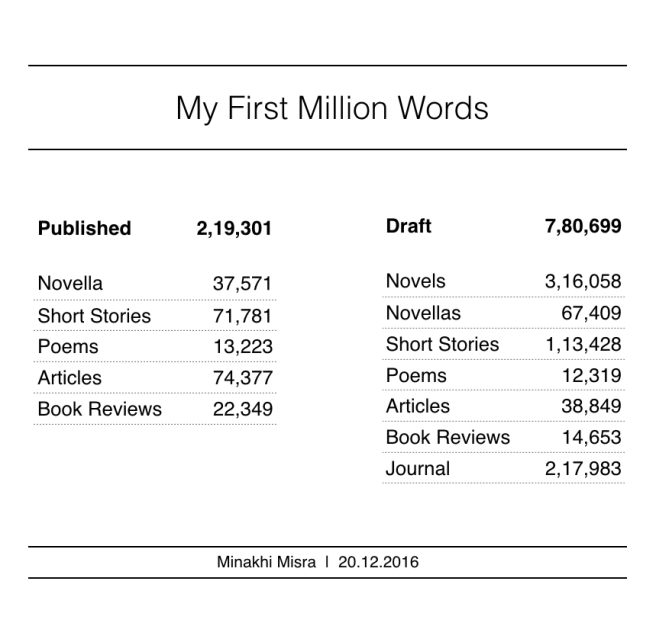 Most of the words in the Draft column now will move to the Published column by mid-2017. But I’ll have filled out more drafts too, inching my way towards the next million words. Right now, though, I am comfortably happy about what I’ve got – comfortable enough to meditate on what it all means and happy enough to keep going forward with it.

One thing is clear. These million words have taught me what “struggle” really means. When I started writing full-time a year and a half ago, I leapt into the “struggle” thinking how difficult it would be to make contacts in the publishing world, or to make my first sale, or to get people to read what I write. As it turned out, all those things were relatively easy. They were still tough to do, of course. Marketing and selling my Kindle novella took months of dedicated effort. Building a readership of over 5000 people took more time and patience than that. And convincing my publishers to accept my novel is definitely among the top three toughest things I have pulled off this year.

But I’ve realised that the real struggle is elsewhere. It’s in the discipline to sit down every day and write honestly. There were so many times when I just wanted to use up the whole day selling the words I had already written instead of writing new ones. I would do that for some time, writing new words for only an hour or so a day, and at the end of a week, I would feel miserable about not writing enough or not writing anything of consequence. That is why, whether I am sick or traveling or attending a wedding function, I write every day. Whether I am in my lowest moods or helping someone else who is, I write every day. Whether I want to or not, I still write every day. And each day I write for at least three hours.

But what do I write? The quality of writing is not the same always. So, simply forcing myself to churn out a few words usually means nothing, since the words are not good. And I struggle with that. I struggle with bringing my thoughts to order. I struggle with not getting paralysed by how many different ways I can take a story forward. I struggle with choosing what to write on a given day – a poem always swims at the back of my head, while I sit and type out a long chapter. And I’ll be fooling no one if I say that writing one million words has made me a master at word-crafting. So, stringing those words together is just as challenging as it ever was.

And I hope I will see you that day too. 🙂

3 thoughts on “Wrote my One Millionth Word today!”

So, what did you think about this? Cancel reply